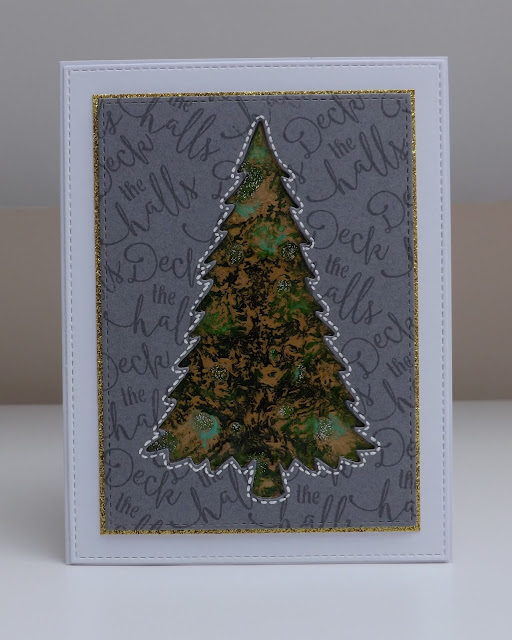 An experimental card using Pebeo Mixed Media Fantasy Paints with the Christmas Tree die set and stamps from the Die-Cutting Essentials Special Volume 2 :D I was inspired by Barbara from Jogglesllc to try using these Pebeo paints, I must have watched her video using them 5 times at least!! and I have plenty more projects mulling around in my brain that I can't wait to try with these :D :D :D After watching her video I was searching around on YouTube for ages and I couldn't find any videos using these in the way I wanted to use them (on cards) so I thought why not film my attempts with them so there's a few card making videos using them floating around out there :D I got my paints from Hobbycraft, they're the smaller bottles, which I think is better because you get more variety of colours for your money, and they're half price too, in their art sale :D

This is the second card I've made with these paints (the first one isn't quite finished yet, but it should be up on YouTube and my Blog in the next week :D) I decided that I wanted to try the lacy effect for this card, which I saw in Joggles video, you first put down quite a bit of Vitrail paint, then you add Moon over the top (this is such a cool technique!! it really looks like magic which you can in the video below :D) So to do this I decided that I would need a 'well' to contain the paint, so I used a stitched rectangle and the Christmas Tree die to create a panel with the tree cut out, then I taped the dies so they would stay together in exactly the same place, and I cut two more (this means that they are all identical and will stack on top of each other nicely :D) then, to get the Tree's trunk in the same place each time, I used the stitched rectangle again, and attached the die to that so that it would cut in exactly the same place at the bottom of the tree each time (it's a little bit difficult to explain in words, but I think if you watch the video and read this it should make sense :D)... I also cut a plain stitched rectangle too....

Now to assemble these pieces... I took two of them and stuck them to the back rectangle exactly on top of each other (you will need to keep the other one to one side until the end as this will cover up all the mess that we'll make :D) you need to make sure that you get the glue all over the die-cut pieces so that they stick together well, especially in the tiny bits between the 'branches' if that makes sense :D Now the next step is something I discovered while making my first card, you need to add quite a bit of the Vitrail to get the lacy effect with the Moon to work, and the Vitrail paint is a glass paint so is designed for a non-porous surface, so when you add this to card it tends to want to seep all the way through :/ however, I found that you can partly prevent this from happening (well stop it from happening as quickly or as much) by applying some tacky glue all over the base of your 'well' because glue is basically plastic this will create more of a non-porous surface so the glass paint won't seep through as quickly :D I do hope that make sense :D You then need to let the glue dry....

The next stage is to add the Vitrail (glass paint) I was using Apple Green, and as with most of the Vitrail colours they are really highly pigmented so you might need to add some lightening medium (the first time I heard of this I was thinking of lightning in the sky lol) I ended up just dropping a bit of lightening medium into the Apple Green once I'd added it to my 'well' but you could mix this in a little cup (those plastic shot glasses from £land would be perfect for these small quantities) before hand :D Then the magic happens.... Add in drops of the Moon paint, I used Gold and watch the lace appear, it is soooo cool to watch, and this process happens pretty quickly too, so although my video is 8x the speed just in real time you can see the effect start to form straight away :D I also added a few drops of Emerald Prisme paint, this doesn't give such a dramatic effect as the Moon, and if you just used Prisme by itself you would get a fabulous honey comb effect, but in this case it kinda sank underneath the Vitrail and just contributed some colour rather than a cool texture, but I think it needed that little bit of lighter colour :D I also added some of the Vitrail Glitter Medium in random dots too, my idea behind adding the drops of Prisme and Glitter Medium was to emulate baubles, in a sort of stylized way lol :D

You then need to leave your Tree on a flat level surface (because otherwise the paint will still run around and move, and could even overflow the edges if the table was really wonky lol) to dry, mine was dry overnight, however because these paints are oil based the layers need to cure, so after finishing the card the next day I've left the card level on a table, and I'll probably leave it for a week to make sure its completely cured :D Also when you're working with these paints you really need to work in a well ventilated area!! As the packaging has the CLP exclamation mark symbol which means Irritant and Harmful and one of my boxes also has the CLP symbol for Carcinogenic too!! There's some of my Chemistry Degree coming back to me lol :D at least it doesn't say its a Teratogen!! :D The last step was to add the final layer to the Tree aperture, this just hides all the mess as the Vitrail will want to seep into the card and as you can see in the video it dis-colours it, I also used a white gel pen to add some tiny stitching detail around the tree to tie in the white of the card black, and then I just added a small matt of gold glitter card to tie in the gold of the lacy Moon paint (and I gutted the middle, because you can't waste glitter card :D) :D Hope you like the card :D Sorry for the really long post! But I like to write everything out so anybody who watches my video will know what I did and also because I'll probably end up forgetting what I did too lol :D

A few more photos below showing the Pebeo paints I used and also a few close ups of the magic effects (or alchemy as Joggles says :D) 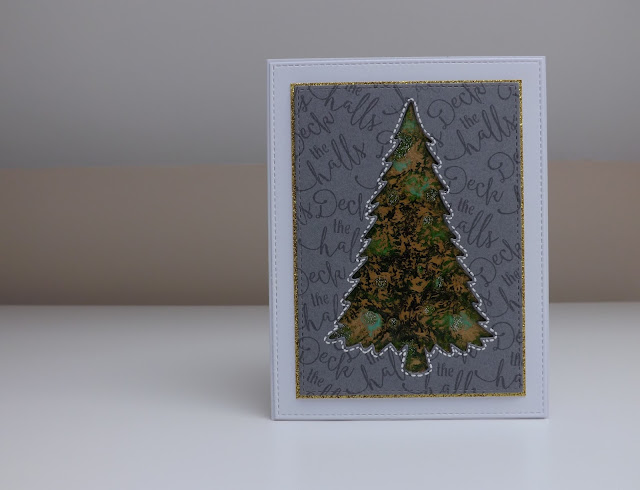 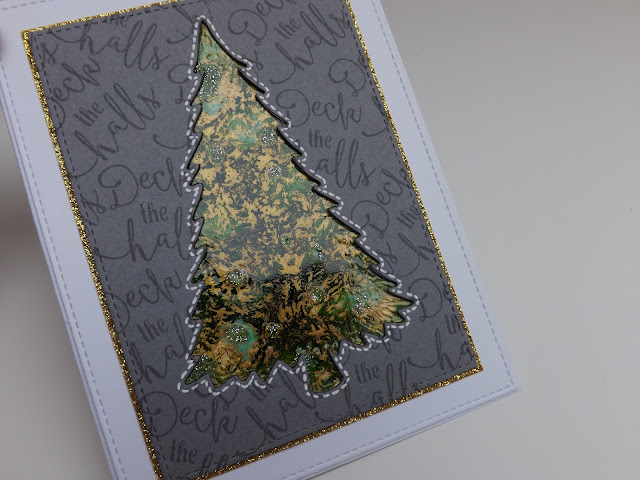 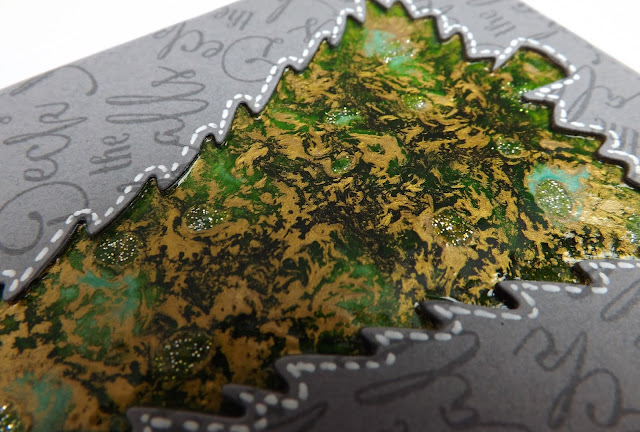 Posted by Crafti Potential at 18:12