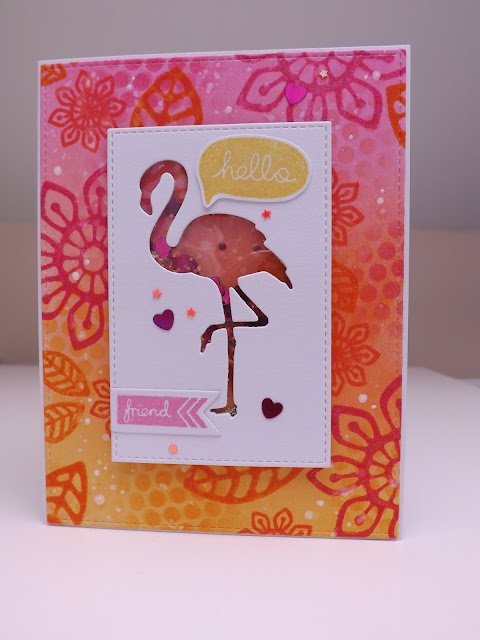 A simple flamingo shaped shaker card in beautifully bright and cheerful colours (I love this colour combo at the moment :D) I made this card using the free flamingo die from an edition of Papercraft Essentials magazine, I saw this die advertised as the free gift for the following issue and was impatiently waiting for next months issue to land on the door mat so I could make this card :D

To create the background I used Picked Raspberry, Abandoned Coral and Spiced Marmalade distress inks and I blended them in an ombre effect. Once blended I used some water and a number 2 round paint brush to create some tiny little splashes of water and then lifted the colour with some kitchen roll... the big flower and leaf stamped in the background, are actually dies cut from funky foam, they are a die set from Sizzix for Craft Asylum, and I got them because I already had the coordinating stamp set (which is where the smaller flower and leaf are from, also a Craft Asylum set). I used Picked Raspberry for the large flower, Abandoned Coral for the small flower and Spiced Marmalade for all the leaves (I really liked stamping the leaves to coordinate with the colour scheme rather than just in green as usual, I will have to remember this for future cards!!). I then decided that the background looked a little too plain, so my trusty piece of punchanella was used to create a little extra texture in the background :D. The next step was die cutting, I got the white panel ready using an MFT stitched rectangle stax die and the free flamingo die, then for the background I used my usual large stitched rectangle die from the MFT blueprints 13 die set and I also used the next die down from the one I used for the white panel (this was a brain wave, as I wanted to keep the background I'd created showing through the aperture of the flamingo, and trying to have lined this up would have been a nightmare, but using a small die to cut the centre of the background out worked a treat, and you can't even tell I did it :D). I then stuck some acetate to the back of the aperture and surrounded the rectangle with foam tape (with a few extra pieces to prop up around the flamingo). Now for the fun part of choosing the sequins :D I used a few of the large sized clear glass micro beads from creative expressions, some pink hearts (which are actually table confetti), some tiny coral stars (which are actually from a nailart set from poundland lol) and some gold shaker mix which is a mix of tiny micro beads and the little circles from the middle of sequins :D

Now for the assembly.... my new technique made this sooo easy, you literally just put the smaller rectangle straight over the back of the open shaker, then slot the whole shaker back into the hole in the background (and I added a little sellotape on the back just to keep it together). For the finishing touches I added a bit of white to the background (in the form of a few random white dots using my signo uni ball broad white gel pen), I also added a scattering of sequins across the front, the sentiment Hello Friend (using the same Craft Asylum stamps set and a banner die set from Avery Elle) (these were stamped in Hero Arts Butter Bar and Bubble Gum inks and I had to add some Spectrum Noir sparkle clear overlay on top :D) then finally I also put some Spectrum Noir sparkle clear overlay on the three big stamped flowers in the background :D There's few close up photos to follow, they're of the two cards I made, as I actually made a second one to send into Papercraft Essentials, however wasn't lucky enough to get it featured in their readers gallery :( maybe next time :D

To see the process behind this card, please check out my YouTube video: 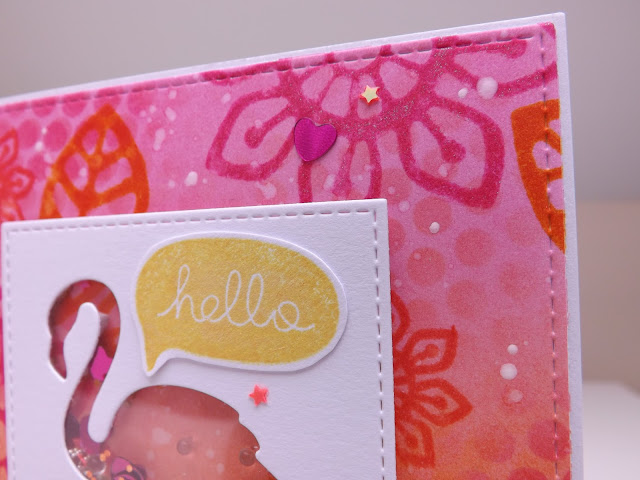 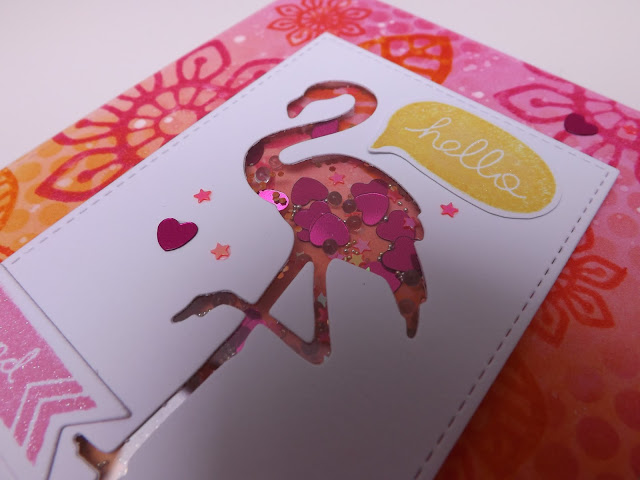 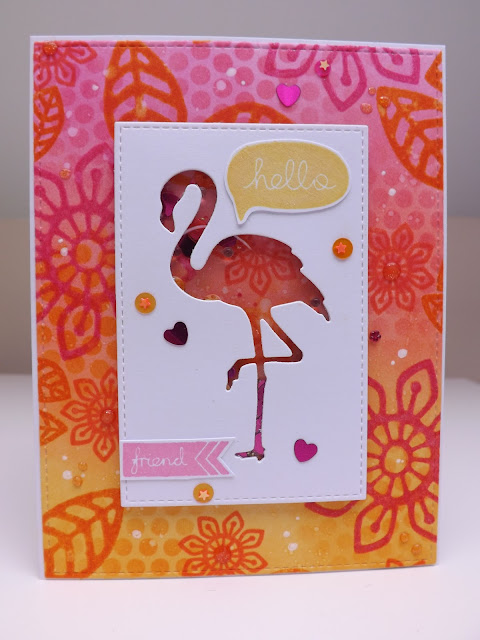 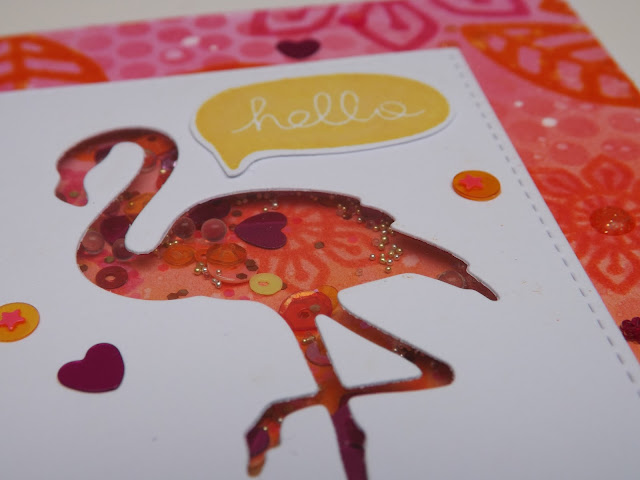 I have entered this card into the Simon Says Stamp Wednesday blog challenge 'Anything Goes'
http://www.simonsaysstampblog.com/wednesdaychallenge/ 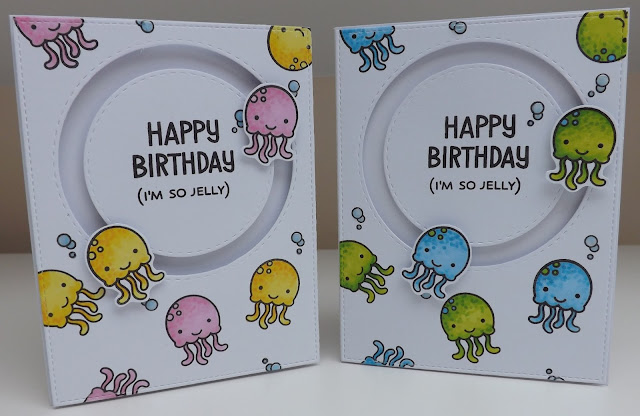 Slider cards seem to be really popular right now, so I had to give them another go, I did my first one about a year ago now, and it had a Lawn Fawn plane stamp that span from one side to the other, I don't think I even took a photo of it as it was a bit of a mish mash lol, anyway, here's my second attempt....  I decided to make two while I was at it, and I couldn't decide on the colour scheme either :D I absolutely love this little So Jelly stamp set by Lawn Fawn, I've made quite a few cards with this set (including a graduation card for a friend that graduated with me last year :D) and I have so many other ideas which I need to get round to trying too lol :D So these are pretty simple cards, I used the MFT Blueprints 13 large stitched rectangle die and 2 Simon Says Stamp double stitched circle dies to create the spinners track... I still need to work on perfecting this type of card, as the track was a bit too close to the edge of the card and its a little difficult to put foam tape around the perimeter of the card, but it still looks 100 times better than my first spinner card lol :D I really love the overall appearance of these two cards, but I do wish they span a little better, but perhaps I'll manage to improve that on my next attempt :D 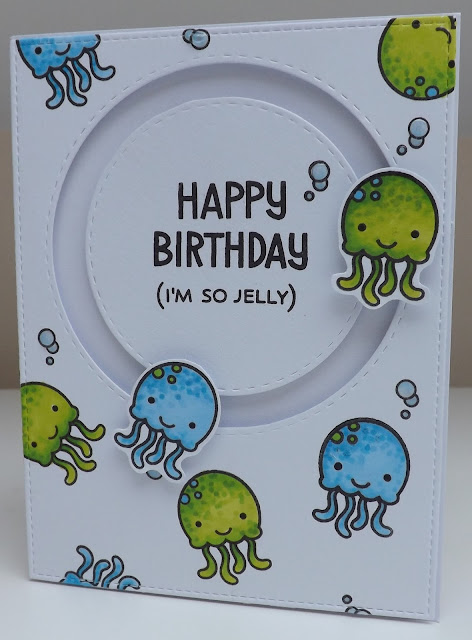 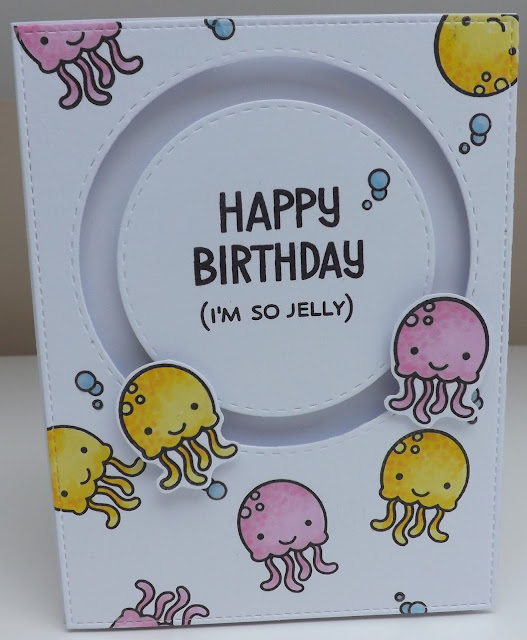 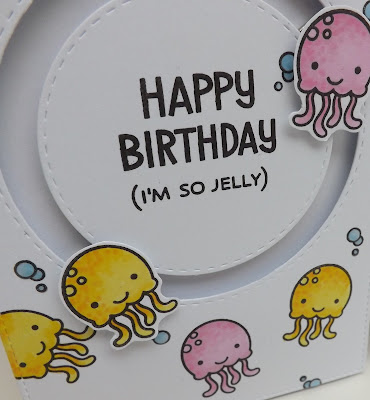 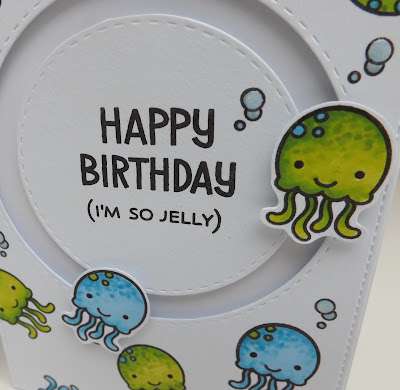 Posted by Crafti Potential at 18:29 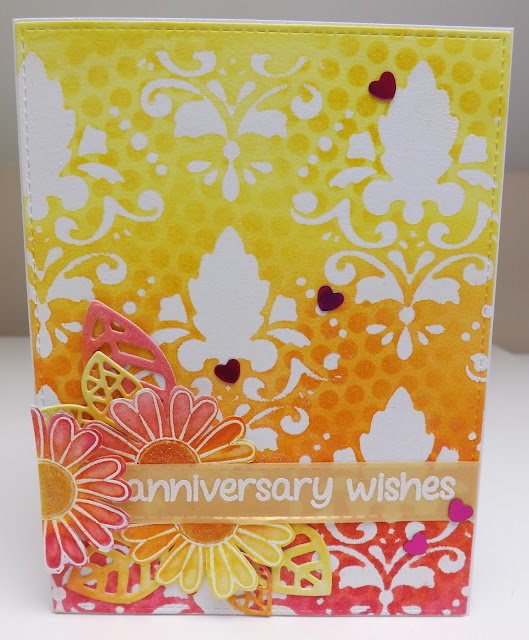 This card was for my Mum and Dad's 32nd Wedding Anniversary, and so I went a little crazy with trying some new techniques :D To create the background I wanted to try getting an embossed resist, but by using a stencil rather than stamping, so I have this lovely damask stencil from That Special Touch, and I ended up squishing my white ink pad through the openings quite firmly so I got a really good coverage of ink, I then removed the stencil and sprinkled on some detail white embossing powder and heat set it :D My original idea was to have a simple emboss resit, so I got out my Gamsai Tambi watercolours (first card I'd used them on!!), and used these lovely vibrant yellow, orange and dark pink colours, I did one wash over the top, let this dry and then did a second coat to intensify the gorgeous colours :D When the second coat was dry, I stenciled on top using distress inks and some punchanella to give the dotty effect.... Something I wasn't expecting was for the paint to stick to the embossing powder (as when I've done this before I've used distress stains, and that seems to come straight off the embossing powder) It just wouldn't go back to the crisp white colour.... so.... I tried another technique! the iron off technique, I've seen this done before, but have always been to lazy to try it lol :D but this was the perfect opportunity for me to try!! (I actually have some more backgrounds I've just done that need their powder ironing off too :D) Next step was the sentiment, also another new technique, I've wanted to try heat embossing on vellum for ages, but didn't think I had any vellum, fortunately I found a little mixed pack of small pieces which are perfect for sentiments :D so I chose a pale gold coloured piece and used this lovely sentiment stamp which was free with a special issue of Die-cutting essentials :D For the focal elements I white heat embossed some lovely flower stamps from a Craft Asylum set and watercoloured them in the same three colours, while I did this I also added the same colours to a scrap of card, and for the leaves I used a Craft Asylum Sizzix die set and Sue Wilsons mosaic leaves dies :D The whole front panel was cut using the MFT Blueprints 13 big stitched rectangle (still my favourite die ever lol) and the vellum banner was cut using the vertical stitched rectangles by MFT (however it was too wide, so I cut a rectangle, then moved the vellum to make it narrower and cut again :D). The final finishing touches were a scattering of heart sequins, and some gold sparkle PVA from Cosmic Shimmer :D I really love this card, and I think I'll deffinetly try the background technique in some different colours :D


To see the process behind my card, please watch my Youtube video below: 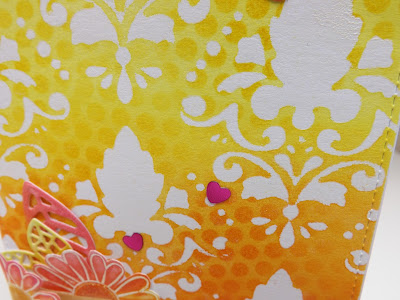 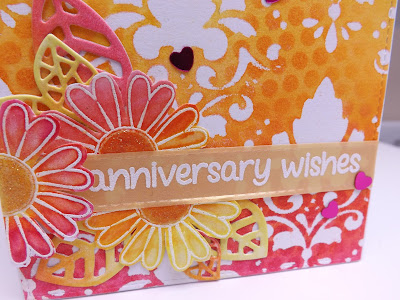 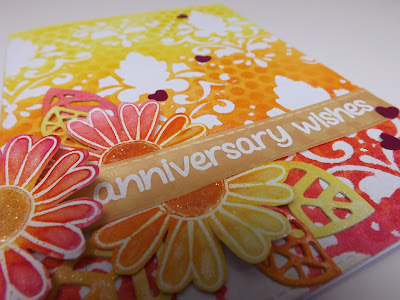 Posted by Crafti Potential at 18:21